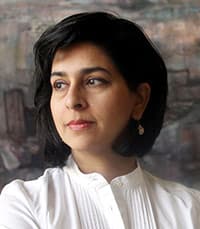 As a founding member and former coordinator of the Vasl Artists’ Collective, Karachi she worked to foster art in the city, and participated in a series of innovative art projects in partnership with members of the Triangle Network. In addition, she has curated The Rising Tide: New Directions in Art from Pakistan, 1990–2010 at the Mohatta Palace Museum, Karachi.  She has been artist-in-residence at the Institute for Comparative Modernities, Cornell University, USA; and Gasworks, London.   Khan is currently an MA candidate at the Centre for Research Architecture, Goldsmiths, University of London.

Khan had her first retrospective, Karachi Elegies, at the Eli and Edythe Broad Art Museum, Michigan State University, 2013. In the same year, she received the Prince Claus Award in recognition of her exceptional initiatives in the field of art and culture.

Annette Loeseke is an art historian with a research focus on museum studies and curatorial studies. Her research interests include critical museum studies; curatorial ecosystems; empirical visitor/stakeholder studies; and cultural-political activism. Her current research deals with curatorial experiments about mining colonial photographic archives and exhibiting agency, protest, and resistance. She was a Senior Visiting Fellow at University College London (UCL) in Qatar. Annette holds a PhD in art history from the University of Bonn. She studied art history, philosophy, romance literature and linguistics, and cultural management at universities in Freiburg, Munich, Paris, and London.

As a lecturer in museum studies at New York University (NYU) Berlin, she co-convened the conference Rethinking Museums Politically at Technical University Berlin in 2017 and the panel discussion "Decolonize Mitte!" Berlin's Humboldt Forum, Museum Island and the Palace at NYU Berlin, in collaboration with Humboldt University in Berlin, in 2018. Recent publications include the chapters "Challenging the Framing of 'Asia' and the Role of the KVVAK" (Royal Dutch Asian Art Society): "The Asian Pavilion at the Rijksmuseum in Amsterdam (in Kunsttexte, special issues, ed. by Iside Carbone and Helen Wang, in print), "Transhistoricism: Using the Past to Critique the Present" (in Simon Knell, The Contemporary Museum, 2019) and "Experimental Exhibition Models" (in Suzanne MacLeod et al, The Future of Museum and Gallery Design, 2018).

Hoor Al Qasimi, President and Director of Sharjah Art Foundation (SAF), is a curator who established the Foundation in 2009 as a catalyst and advocate for the arts in Sharjah, UAE, as well as regionally and internationally. With a passion for supporting experimentation and innovation in the arts, Al Qasimi has continuously expanded the scope of the Foundation over its ten-year history to include major exhibitions that have toured internationally; artist and curator residencies in visual art, film and music; commissions and production grants for emerging artists. In 2003, Al Qasimi co-curated Sharjah Biennial 6 and has since continued as Biennial Director. Under Al Qasimi’s leadership, the Sharjah Biennial has become an internationally recognised platform for contemporary artists, curators and cultural producers. Her leadership in the field led to her election as President of the International Biennial Association (IBA) in 2017, an appointment that transferred IBA’s headquarters to Sharjah. Complementing her role at SAF, Al Qasimi also serves as the President of The Africa Institute and Chair of the Board for the Sharjah Architecture Triennial, which inaugurated its first edition in November 2019. Al Qasimi served as curator of the second Lahore Biennale, which opened in January 2020 across the city of Lahore, Pakistan.

Since its establishment in 2009, Al Qasimi has curated several major exhibitions mounted by Sharjah Art Foundation, including Tarek Atoui: Cycles in 11, Zarina Bhimji: Black Pocket, Amal Kenawy: Frozen Memory (2018–2019), the major retrospective Hassan Sharif: I Am The Single Work Artist (2017), Yayoi Kusama: Dot Obsession (2016–2017) and Robert Breer: Time Flies (2016–2017). Other notable projects include the UAE Pavilion at the 56th Venice Biennale (2015) and the solo exhibitions Simone Fattal (2016), Farideh Lashai (2016), Rasheed Araeen: Before and After Minimalism (2014) presented at Sharjah Art Foundation. Al Qasimi co-curated the landmark exhibition Joana Hadjithomas and Khalil Joreige: Two Suns in a Sunset (2016), which debuted in Sharjah and travelled to Jeu de Paume in Paris, France; Haus der Kunst in Munich, Germany; and IVAM in Valencia, Spain. She also co-curated the major survey shows When Art Becomes Liberty: The Egyptian Surrealists (1938–1965) in Cairo, Egypt (2016) and The Khartoum School: The Making of the Modern Art Movement in Sudan (1945–Present) in Sharjah, UAE (2016–2017).

Al Qasimi serves on the Board of Directors for Kunst-Werke Berlin e. V. in Germany and Ashkal Alwan in Beirut, Lebanon. She is the Chair of the Advisory Board for the College of Fine Arts and Design at the University of Sharjah and is a member of the advisory boards for Khoj International Artists’ Association, New Delhi, India and Darat al Funun, Amman, Jordan. Previously, she was a board member for MoMA PS1 in New York, USA (2010–2021), UCCA Center for Contemporary Art, Beijing, China (2013–2016) and a member of the Prince Claus Award Committee (2016–2020) as well as on the juries and prize panels for the PinchukArtCentre’s 5th edition of the Future Generation Art Prize (2019), Bonnefanten Award for Contemporary Art (2019), Maria Lassnig Prize (2017), Mediacity Seoul Prize (2016), Hepworth Wakefield Prize for Sculpture (2016), Berlin International Film Festival–Berlinale Shorts (2016), Videobrasil (2015), Dubai International Film Festival (2014) and Benesse Prize (2013).

Bahia Shehab is a professor of the practice of design and founder of the graphic design program at The American University in Cairo, where she has developed a full design curriculum mainly focused on the visual culture of the Arab world. She has taught over fourteen courses on the topic. She frequently lectures internationally on Arab visual culture and design, design education and curriculum development, Islamic cultural heritage, and her art practice.

Shehab holds a PhD from Leiden University in The Netherlands and is the founding director of TypeLab@AUC. Her publications include A Thousand Times NO, At The Corner of a Dream and the co-authored book A History of Arab Graphic Design. Her latest book You Can Crush the Flowers: A Visual Memoir of the Egyptian Revolution published in 2021 marks the ten-year anniversary of the uprising.

Her artwork has been on display in exhibitions, galleries, and streets internationally and has received several international recognition and awards. TED fellowship (2012) and TED Senior fellowship (2016), BBC 100 Women list (2013, 2014), The American University in Beirut distinguished alumna (2015), Shortlist for V&A’s Jameel Prize 4 (2016), and a Prince Claus Award (2016). The documentary Nefertiti's Daughters were featuring her street artwork during the Egyptian uprising released in 2015. She is the first Arab woman to receive in 2016 the UNESCO-Sharjah Prize for Arab Culture.

She has curated several exhibitions at the Modern Art Museum, Gebre Kristos Desta Center.  more recently an exhibition of Julie Mehretu’s work titled “Julie, the Addis Show,” the exhibition Time Sensitive Activity (2015 of Olafur Eliasson’s work, and contributed to the exhibition catalogs of Addis Ababa: The Enigma of the New and the Modern (2013) and Revolutionary Motherland or Death: Students’ Work during the Derg Regime (2012). Her comprehensive study of Ethiopian modernism, Modernist Art in Ethiopia (2019) is a critical study of Ethiopian visual modernism within an interdisciplinary social and intellectual history. The African Studies Association (ASA) presented the Bethwell A. Ogot Book Prize to the author for the best book on East African studies published in the previous calendar. Modernist Art in Ethiopia (Ohio University Press, 2019) was also named a finalist for the annual ASA Book Prize. It was also shortlisted for the ASA of the UK’s Oliver and Fage Prize.

Giorgis received her PhD in History of Art at Cornell University and an MA in Museum Studies at New York University.

Idrissou Mora-Kpai is an award winning filmmaker whose films have been screened world-wide at prestigious festivals in Berlin, Rotterdam, Vienna, Milano, Busan, Sheffield. Born in Benin, West Africa, Idrissou’s social documentaries tackle post-colonial African societies, African migrations, and diasporas. Idrissou graduated from the Potsdam Babelsberg’s Film University and lived in Germany and France for nearly two decades. In 1999, he established MKJ FILMS, a production company principally devoted to documentary films. He is currently Assistant Professor in the Department of Media Arts, Sciences and Studies at Ithaca College. He is a recipient of the prestigious  Prince Claus Award (2013) for his artistic achievements dedicated to promote social change in the Global South. He is a graduate of the Konrad Wolf Film University of Babelsberg (Germany) and has been a guest artist and visiting faculty member at Duke University and the University of Pittsburgh.

Following a series of successful short documentaries, Mora-Kpai released his first feature length film, Si­-Gueriki: The Queen Mother, in 2002. The film is an intimate and personal story about Idrissou’s return to his home village in Benin. In it, he attempts, after years of estrangement, to establish a relationship with his mother; in the process, he also learns about the rapidly changing role of women in rural Benin. His second documentary feature, Arlit, the Second Paris (2005), denounces multinationals’ exploitation of Africa’s raw materials, their disregard for workers, and the injustices and inequalities of North‐South relations. Mora-Kpai’s most recent feature length project, Indochina ­- Traces of a Mother (2011) tells the story of African colonial soldiers forcefully conscripted to fight for the vanishing French Empire in Indochina and the fate of their mixed‐race children. Idrissou’s most recent film, America Street explores the daily struggles of an African-American community in a quickly gentrifying historical black neighborhood in downtown Charleston, South Carolina, just after the 2015 Walter Scott killing. Mora-Kpai is also currently at work on his first fiction filmmaking project, tentatively titled Border.

Ibrahim El-Salahi is a leading African modernist artist, whose productivity has spanned more than five decades, and a powerful intellectual who remains morally conscientious, socially concerned, and uncompromising in his artistic integrity. El- Salahi’s prolific career is one of constant experimentation with different techniques, symbolic languages, and visions. His diverse body of work combines a critical understanding of Western art principles with an original visual sophistication in their reference to Sudanese and African as well as Islamic art forms.

Born in 1930 in the historic city of Omdurman, Sudan, El-Salahi studied at the School of Design, Gordon Memorial College (subsequently renamed the Khartoum School of Fine and Applied Art) between 1948-1954, where he majored in painting. Between 1954-1957, he studied at the Slade School in London. He returned to Sudan and taught for many years at the School of Fine and Applied Art, one of the most active centers of creative talent in Africa and a major contributor to the growth of the modern African art movement. It was under the leadership of El- Salahi that the “Khartoum School” emerged as an important group of Sudanese artists known for their distinct and innovative styles. El-Salahi’s powerful paintings reflect a life of struggle, migration, contemplation, and critical meditation. Revered throughout Africa and the Middle East, El-Salahi has inspired generations of artists with his meditative approach to imagery.

In 2001, he was honored with a Prince Claus Award from the Netherlands. A major traveling retrospective of his career entitled Ibrahim El-Salahi: A Visionary Modernist was unveiled in Doha in 2012, as a collaboration between the Museum of African Art in New York and the Cultural Village Foundation (Katara). In the summer of 2013, this exhibition of one hundred works was presented at the Tate Modern gallery, London, - the Tate's first retrospective dedicated to an African artist. This retrospective traced El-Salahi’s journey from Sudan, his studies at the Slade, his periods of travel and residency in the United States, Mexico and Brazil, his self-imposed exile in the United Kingdom and Qatar, and, most recently, the United States. In 2016-17, El-Salahi's work was featured prominently in the first comprehensive exhibition dedicated to the Modernist art movement in Sudan, entitled The Khartoum School: The Making of the Modern Art Movement in Sudan (1945 – present) at the Sharjah Art Foundation in the United Arab Emirates. In 2018, the Ashmolean Museum in his adopted home in Oxford, United Kingdom, presented a solo exhibition of El-Salahi's work.